The Myth of the Museum – set of all three publications

The Myth of the Museum is a set of three publications charting a journey made by Dr James Lattin in which he questions the purpose of museums.

In Part One: Museum Malaise, Dr Lattin succumbs to a malaise in which he cannot work out his feelings for the Museum, in that it delights him and annoys him in equal measure. He decides to spend more time in the Museum, but finds that he cannot leave. Instead, he wanders around the Museum, and explores its future history. Will he ever find his way out?

In Part Two: The Passage to Brimstone, Dr Lattin travels from the Museum to an Island. Upon further exploration, he realises this Island is full of small museums, which initially he finds enchanting, yet as time progresses, he becomes burdened with visitors’ expectations. Will he ever be able to work out what his ‘perfect museum’ would look like?

In Part Three: Per Imaginatio Ad Astra, having returned to the mainland, and seemingly free of the weight of the past (as represented in the Museum), Dr Lattin sets out on the final leg of his journey. He plans to travel to the Castle via a series of stopping points known as ‘lay-bys’. But when he gets to the Castle, will it still exist as he remembers it? 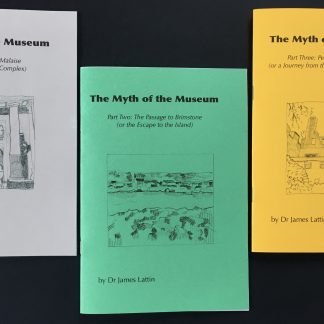 You're viewing: The Myth of the Museum – set of all three publications £8.00
Read more